Sharing a powerful message for a nonprofit organization is notoriously challenging. You can talk about the challenges you solve or whom you serve. However, your future donor still needs to see themselves in your story in a way that makes them a hero beyond the donation they might make.

This post looks at a message from a partnership between Stella Artois and and then evaluates their messaging through the StoryBrand lens.

According to the StoryBrand 7-part framework (SB7), effective messages include the elements listed below.

StoryBrand Elements in The Wait for Water

Who is the Character?

The characters in the story are people in under-developed countries who lack access to clean water.

Normally, the character of the story is also the hero. Except that in the case of fund-raising, the hero is actually the donor, to whom the message is directed.

The hard part becomes how to get people with water (the heroes) to see the plight of those without it, such that they are willing to take action on behalf of those who need it.

What is the Character’s Problem?

These people often spend 6-hours a day just trying to secure water for life, and even then, it might not be what we call potable. They actually have many problems, but the story chooses to focus on just one – the amount of time people spend on getting water.

It’s a brilliant approach because everybody has an understanding of time, even if the plight of those far away are far from awareness.

Who is the Guide?

Empathy is expertly established by giving various people in first-world conditions a taste of the problems that the characters suffer. The story surreptitiously places people in a situation where they have to wait for 6-hours for water, where they otherwise take water for granted.

For Western society, this idea is so preposterous, that both the people placed in this situation as well as the viewer begin to identify with the plight that the Character faces, even before having been introduced to them.

Water.org is already solving the problem of access to clean water, but they need help. They are not making a straight plea for money. Rather, they are asking the viewer/donor/hero to join as a partner to solving this basic problem.

And to make sure solving this problem remains something that people care about, they tie it to something we’re less likely to forget once we get a drink. “We want everyone in the world to have time for what is important to them.” Water is the vehicle for making that happen. Even those with water can still identify with the desire for freedom of time.

Completing the pivot involves making the viewer shift their perspective from the plight of those without time or water, to how phenomenally powerful and blessed they are to have water and the freedom of time that secure water offers. It’s not about making the viewer feel guilty – it’s about making them feel empowered to do something – to be a hero!

When the ad says “Through our partnership we’ve already helped more than one million people gain access to clean water,” they are establishing credibility and authority to solve this problem.

With “But together, we can help so many more,” they are creating an opening in the story for the viewer to step inside as the hero. It’s an invitation to be amazing, and it’s a powerful draw.

The Plan and Call to Action are Collapsed

This is the best part… helping out, becoming the hero, is incredibly simple. By taking action, that is the plan for making a difference. Taking action is how you get to actualize yourself as the hero.

Success looks like being part of a great mission. It means I get to be a superhero, like Matt Damon, or Water.org, or Stella Artois.

How the Guide help the character avoid failure?

They don’t focus on failure being about people without water. Instead, the failure would be doing nothing. The failure would be turning your back on your power to make a difference. This is all implied and does not get the focus or attention that so many other guilt-laden messages from non-profits use.

Create a Powerful Story for Your Brand. Work with a Certified StoryBrand Guide

This site uses Akismet to reduce spam. Learn how your comment data is processed.

Most professionals don't know how to talk about their services in a way that has their prospects pick them to work together.

I help businesses use the power of stories to convert prospects into customers.

When you're ready to pick yourself first, let's talk. 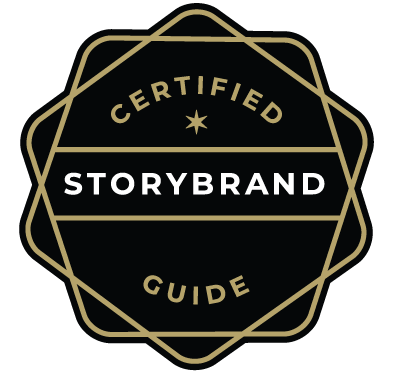